Our prediction for this match is draw 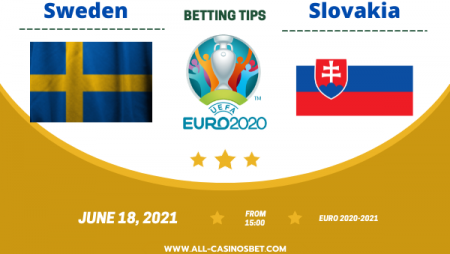 Sweden vs Slovakia will face each other in a match of the second round of Group E. The match will be played on June 18 in St. Petersburg at the Gazprom Arena Stadium starting at 15:00. The other two teams from the group Spain and Poland will measure their strength the next day in the city of Seville.

The Swedish team can be satisfied with its debut match at Euro 2020 and the 0-0 draw with Spain. Tre Cronur won a valuable point in the fight in Group E and currently ranks third in the standings.

The good performance of the Swedes in the match with “La Furia Roja” was not a surprise against the background of the five consecutive victories that the team had recorded before. Against Slovakia, the alumni of Jan Anderson will pursue the three points, which will almost certainly guarantee the team’s transition to the elimination phase of Euro 2020.

Slovakia shocked Poland in the match between the two teams in St. Petersburg on June 14. After 1: 2 over Lewandowski and company, Stefan Tarkovic’s team is the sole leader in the group.

Even a point in one of the next two matches against Sweden and Spain will probably be enough for the Slovaks to advance in the tournament. I remind you that according to the new rules, in addition to the first two teams from each group, the four best third teams continue.

In the upcoming match between Sweden and Slovakia, we expect the battle and tactical football to prevail. The probability that the match will end in a draw according to the odd 3.48 in Novibet makes us focus on this prediction.